ReSource International has developed a world-​leading method of quantifying and mapping landfill gas emissions using UAVs (drones), which has been demonstrated in recent tests to be accurate compared to controlled releases.

How it works – Quantification

A highly accurate (±0.6ppb) methane sensor is flown on a UAV downwind of the landfill site. Windspeed measurements are taken on the UAV and on the ground, and the result of this can be used to give a precise flux rate after the plume is reconstructed by a software algorithm.

This method, based on pilot work conducted in Sweden (in press) compares well to acetylene tracer methods in both controlled release and real-​world situations down to flow rates of just a few kg/​h. It appears to be significantly more precise than traditional flux-​box measurements, which require unrealistically high sampling densities for precise measurements.

How it works – Tracing

To map emissions sources, the UAV is flown at low altitude (typically 15m if a local topographic model is available) and emissions are algorithmically interpolated to give a map of emissions sources. Sources typically are a short distance upwind of where the UAV first measures the plume. The same gas sensor can be easily dismounted from the UAV and used to trace gas leaks to cm-​level precision using a handheld wand. Approximately 200 ha per day could be covered using this approach, depending on density. 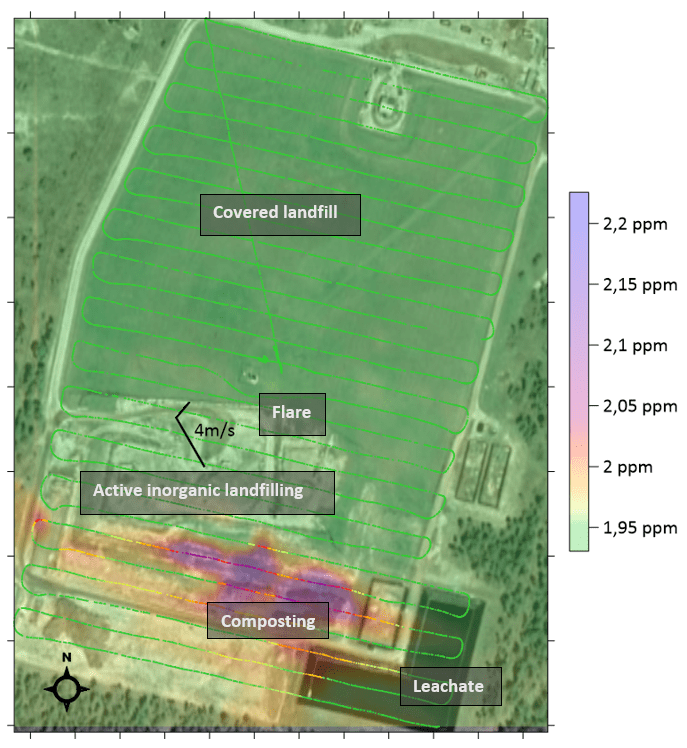 Map of typical small landfill with good gas collection. The total emissions rates from this landfill are on the order of 2 – 4kg/​h and come mostly from composting activity in the south side as clearly visible. No large methane slip is detected from the gas flare or leachate pond.

UAVs flying at 35km/​h can be used to quickly and safely build a near-​ground map of emissions that would otherwise be laborious, dangerous or impossible. Precision is also greatly improved over ground-​based mapping of complex sites, as wind direction is more likely to be constant and “pools” of gas are ignored.

Interested in this service ? Please leave us a message.